UPDATE: The project is substantially complete. As of March 20th, irrigation water was flowing in the Gun Club Lateral through the project reach.  AMAFCA would like to commend AUI and Guzman Construction Solutions for their hard work and dedication to this project.

The, “Three Dam Outlet Pipe Project”, was conceived in 2003 to provide an outlet for Don Felipe Dam, Raymac Dam and McCoy Dam to the Rio Grande.  The three dams were originally constructed to outfall to natural arroyos west of Coors and ultimately drain into the valley floor before being intercepted by the Isleta Drain. The gated dams were the subject of many discussions between the NMDOT, Bernalillo County and the MRGCD from the late 1970’s to 2003. The dams did provide protection to downstream properties, but the flows from the dams did present additional maintenance along Coors Boulevard, County roads and MRGCD facilities.

The general project concept was to extend a pipe (manifold) north and south to connect the three dam outfalls between Don Felipe and McCoy Dams. The manifold, would then be connected to a pipe that ran east and west to the Rio Grande, providing a dedicated outfall to the river.

The east west pipe was constructed by the Corps of Engineers Black Mesa Project, that was cost shared with Bernalillo County and AMAFCA and located in Raymac road. The next phase of the project was constructed by AMAFCA in 2014 and crossed Coors Boulevard to MRGCD right of way.

The manifold pipe alignment is “straight-lined” within the Gun Club Lateral right-of-way and will involve reconstruction of the lateral and associated irrigation turnouts and ditch crossings. Due to time limitations required by the MRGCD, the mainfold project has been broken into several phases. The current phase will connect Raymac Dam to the portion of the overall project already constructed and will extend the pipe north and south along the Gun Club Lateral between Dominican Road and just north of Maplewood Ave. Construction started on November 1, 2018 and is anticipated to be substantially complete by March 1, 2019 in time for MRGCD irrigation season. 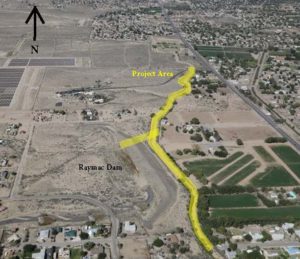